A Florida mother is accused of helping her son and one of his friends beat up another boy in a cowardly attack at a high school last week. The victim said the mother of one of the attackers joined the fight and held him down so the other boys could continue beating him.

Ashley Ruffin, who also displayed a taser during the assault, grabbed the victim by his hair and held him down while her son and the other boy repeatedly beat him at Indian Trails Middle School in Palm Coast.

Flagler County Sheriff’s Office deputies were called to the scene Wednesday after the victim’s mother reported seeing the attack at the school’s athletic complex.

The complainant told deputies she saw Ruffin get out of his car and jump into the fight to help her son.

During the investigation, the unidentified victim told authorities he was sitting with his friends when two boys approached him and one of them began punching and shoving him, according to the statement. At that point, the boy said, other boys approached and began helping the assailant.

The victim said the mother of one of the assailants joined the fight and held him down so the other boys could continue beating him, according to the sheriff’s office. Other witnesses confirmed his account.

Authorities identified the suspect as Ruffin, 30, and arrested her without further incident. Ruffin was booked into a local jail later that day on charges of assault and child abuse. His son is expected to be charged with assault in juvenile court. 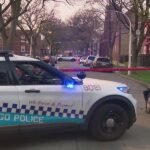 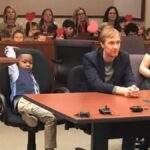