Lady Gaga revealed she wore a bulletproof dress to sing at President Joe Biden’s inauguration. Before appearing on stage, Gaga said that singing the national anthem at the inauguration is “an honor for me.”

The “House of Gucci” actress talked about her performance at January’s presidential inauguration in an interview with British Vogue magazine published Tuesday.

She said singing at the U.S. Capitol was “one of the proudest days of my entire life.”

“I felt deep fear when Trump was president, and taking out 45 and 46 is something I’ll be able to tell my kids about,” Gaga told the magazine.

She went on to say that she was “singing in a bulletproof Schiaparelli dress” at the ceremony and that if she hadn’t been an artist, one of her dreams was to be a “combat journalist.”

Gaga added, “When I was on Capitol Hill the day before the inauguration, I remember walking around and looking for evidence of the insurrection.”

In January, Michael Gold of The New York Times called Gaga’s performance at the inauguration “the culmination of a yearlong relationship” in which Biden and Lady Gaga “have shared the spotlight.”

The singer campaigned for Biden in the months leading up to the November 2020 election and introduced her at the Academy Awards in 2016.

Before appearing on stage, Gaga said that singing the national anthem at the inauguration is “an honor for me.”

Gaga took the stage at the inauguration before Vice President Kamala Harris was sworn in and sang the “Star-Spangled Banner” while wearing a blue jacket and voluminous red skirt. 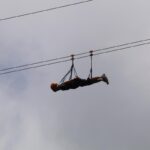 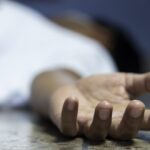