Forget Chris Brown dissing and awkward Marilyn Manson cameos – Kanye West is embroiled in another hot controversy after being accused of ripping the logo off merchandise for his album “Donda”.

The 44-year-old allegedly stole the logo design from the black-owned company, according to Randy Dawkins, creative director of fashion line Infinity G8ds.

Dawkins told the Daily Beast that West’s merchandising features a direct copy of the design that appears on his brand’s T-shirts and hoodies.

“It’s disappointing,” Dawkins told the outlet. “We don’t have bad vibes or bad feelings about him, we actually like the guy. But how did he handle business? Well, that’s another story.”

The $100 T-shirts in question were sold at West’s “Donda” album listening party on Aug. 5 at Mercedes-Benz Stadium in Atlanta.

The T-shirts were beige in color and featured a long black Star of David with a thin cross engraved in the middle. Below the design read the name of the record and the date of the event.

On July 26, Dawkins said he and his team traveled from Miami to Atlanta to meet with West at his studio. “The conversation was pretty general,” he continued. “He just wanted to understand our process. We explained it to him and broke it down. He loved the whole idea, the whole design.”

Reece allegedly called the label a week later and admitted that he saw the company’s logo design on West’s T-shirts. Dawkins also told the publication that the Chicago native’s business manager reached out to Infinity G8ds, however, no resolution has been found. Reece was also fired as West’s personal chef. 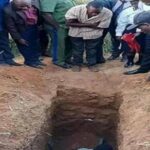